Nepal Orthopaedic Hospital (NOH) was established in the premises of the Nepal Disabled Association (NDA) at the Khagendra New Life Centre in Jorpati in Kathmandu in August 1998.Its sole intention has been to provide quality orthopaedic care, at an affordable price, of which most Nepalese have been deprived.

Professor Shanker Raj Pathak who was the chairman of the Nepal Disabled Organisation at that time and Dr. Anil Bahadur Shrestha who was an orthopaedic surgeon working in Bir Hospital then, worked together to bring the hospital to life. Professor Pathak became the founding Chairman of the Hospital Board and Dr. Anil Bahadur Shrestha became the founding Medical Director of the hospital. 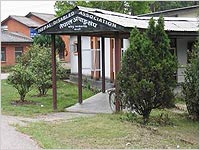 When Dr. Anil had come in the picture, the hospital building was already complete. The hospital could not be operational because of inadequate funds. Dr. Anil then teamed up with Mr. Luc Salens, a Rotarian from Maldegem, Belgium. Luc raised money from various sources in Belgium and promised to support the running cost and initial capital expenses. Dr Anil garnered a team of doctors, nurses and administrative staff which numbered 15 initially and the hospital became operational since August 1998. He was the guiding force of the hospital in public relations and raising funds for future projects.

The hospital felt the need to expand as service demands grew and people from all over Nepal came for treatment. The reputation of the hospital as a charitable institution grew and more poor patients came. Soon there was realization that in order to be self-sustaining, the hospital needed to open up a private ward so that income could be generated. The same income could cover for the running costs of the hospital as well as give some cross-subsidy to the patients in the general ward.

The hospital has been striving from the beginning to shed its dependency on external aid for the running of the hospital and it has been largely successful in doing this. The current status is that of complete independence in the day to day running expenses. This was achieved through the hard work put up by all the orthopaedic surgeons, medical officers, staff nurses, other paramedics and administrative and technical staff and of course the guidance of the management committee. The various Rotary clubs both national and international and other known and unknown well-wishing donors are also to be thanked for the incremental success story of the hospital.

The hospital started from humble roots with very little equipment but over all these years, the hospital has been able to update equipment like, hospital back-up generators, newer anaesthesia machines, portable x-ray machines, latest CR and DR xrays, c-arm fluoroscopes, patient monitors, arthroscopy, BMD, ETO sterilisation unit etc. Also the quality of surgery has expanded from simple trauma cases to difficult trauma case handling, deformity correction prowess has been much enhanced, spinal instrumentation, difficult Ilizarov surgeries and arthroplasty and other difficult surgical endeavours have now become common place.The surgery schedule started initially from once a week to six days a week since January 2011. Dr Saju Pradhan, the 2nd Medical Director, has played an instrumental role in acquiring most of the super equipments and  modernising  the hospital. Dr. Rajesh Maharjan, the 3rd Medical Director, played an important role in the development and smooth functioning of the hospital during his tenure.

As the patient flow and the demands for general beds have been growing, a third expansion phase containing male and female ward with 26 beds have been completed. After addition of these extra beds, NOH has come into the category of a 100 bed hospital. This helped to ease a lot of load on other providers of orthopaedic care in the national arena. The funding for this project has come from multiple sources including from Mr. Luc Salens from Belgium and Rotary Clubs from Belgium. The equipment to be installed for the ward has been awarded a Matching Grant from Rotary International. Rotary Club of Patan is the local partner for the project. Part of the money raised for the construction of the ward has come from a ‘Disability Walk’ organized by Nepal Orthopaedic Hospital and various Rotary Clubs of Kathmandu and Patan and also from the selling of lottery tickets by the NOH Staff Union. Part of the comprehensive expansion project for the third phase is expected to be covered by Stichtung Help for Nepal.The  ward was named Sagarmatha General Ward which was inaugurated by Rt. Honorable President Dr. Ram Baran Yadav on December 3rd 2011. Since then Nepal Orthopaedic Hospital is operating 100 beds and providing services to the general Nepali population in an affordable way.

Continued progress of the hospital is reflected by the growing number of patients and their trust in us. With  the OPD, IPD and the number of surgeries soaring record high in 2016; NOH is fully committed to honor its founding principals of serving the nation under the leadership of Dr Yubaraj Kharel, the current Medical Director.